The Icefall Traverse is a hut-to-hut traverse through some of the best ski touring terrain in Canada. You will travel through complex glacier terrain past some of the highest peaks in the range carrying only a light pack. This may sound like the Haute Route or other tours in the Alps. The only difference is that you won’t see anybody else around, just the group that you helicoptered in with. This traverse incorporates the two newest huts in Canada.  The Rostrum Cabin was built in 2019, and the Alexandra Cabin in 2020. It also stops at the Lyell Hut, Mons Hut and the more comfortable Icefall Lodge. You will have exclusive use of 5 mountain huts with just a small group. In the right conditions, this traverse can allow you to ski  3 of the longest runs in Canada, all over 7000 feet vertical.

The Icefall Traverse travels through the rugged alpine terrain surrounding Icefall Lodge and encompasses five huts, including the highest elevation ski touring hut in Canada. Check out the amenities and terrain around Icefall Lodge, or learn more about our numerous satellite huts!

Day 1: We helicopter into the Mons Hut which sits at the toe of the glacier near the base of Mons Peak. Stepping out the door of the hut, you get a view of the Icefall on the Lyell Glacier. The traverse will pass above this icefall the next day. The Mons Hut gives access to many ski peaks and long glacier runs. Possible objectives include Mons Peak, Cambrai or the North Glacier on Mount Forbes. At 3612 m, Mt Forbes is the highest peak in Banff National Park. The run on the North Glacier takes you right up to the imposing north face.
‍
Day 2: After a night at the Mons Hut, we travel to the Lyell Hut. There is a long run down to the edge of the Icefall Canyon, a 2000′ deep hole ringed with sheer cliffs and filled with frozen waterfalls. The Lyell Hut sits on a rock outcropping at 9300 feet and is surrounded on all sides by glacier. This is the highest elevation ski touring hut in Canada. You can watch alpenglow sunsets on the north face of Mt Forbes out the front window. One evening possibility is to ascend Christian Peak, Lyell 5, watch the sunset and ski down to the hut in the evening twilight. It takes about 10 minutes to ski from the summit to the hut.
‍
Day 3: We will cross the Continental Divide over into Alberta and ski Rudolf, Edward and Ernest (Lyell 1, 2 and 3). These are some of the highest peaks in the range, and we can normally ski right off of the summits. From the summit of Lyell 3 (Earnest Peak 3448m), we have a 2200m descent down a run called the Wild West. This is the longest ski run in Canada. You will ski down from one of the highest peaks in the range through spectacular icefalls and end your run at the newly completed Alexandra Cabin. This run was first skied over ten years ago, but it has only been skied a handful of times since. It was normally only skied by very fit groups on the ski mountaineering course. The addition of the Alexandra Cabin has made this run a lot more feasible for the average group.
‍
Day 4-5: After a comfortable night in the Alexandra Cabin with a wood stove and sauna, you will head for Icefall Lodge, where you will spend the next two nights. The route to the lodge climbs up out of Lyell Creek by either the portal or the Shark’s Gate. The addition of the Alexandra Cabin means you will do this in the morning when it is cooler and generally safer. You are treated to a sauna, shower, electricity, wood stove, double rooms, running water, and many other comforts at the lodge. The lodge sits at treeline, and if the weather is snowy, there are many tree skiing possibilities here. It is usually possible to arrive at the lodge earlier in the week if it is bad weather up at the huts. There are multiple ski objectives, both summits and ski runs from the lodge.
‍
Day 6: Climb over Ice Pass and ski down to the Rostrum Cabin. It is also possible to ski to the summit of Mt Kemmel along the way and enjoy a 1200m ski down to the hut. The Rostrum Cabin sits at treeline with a view of the blue ice and tumbling glaciers draping Rostrum Peak. While it is smaller than the lodge, it has many of the same comforts. The last day is a skin up to the Tempest Glacier and a long run down to the valley bottom for a helicopter pick-up. You will pass through Porcupine Saddle, skiing past blue glacier ice and sometimes through crevasses. In the right conditions, you can climb and ski from the summit of Icefall Peak to the valley floor. Another run of over 7000 feet vertical. 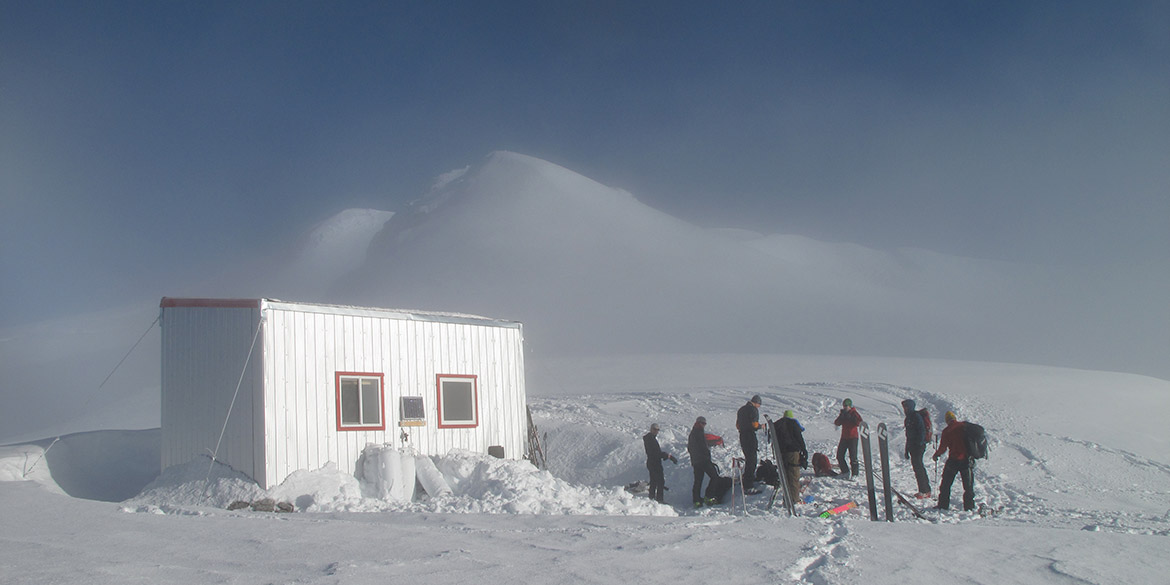 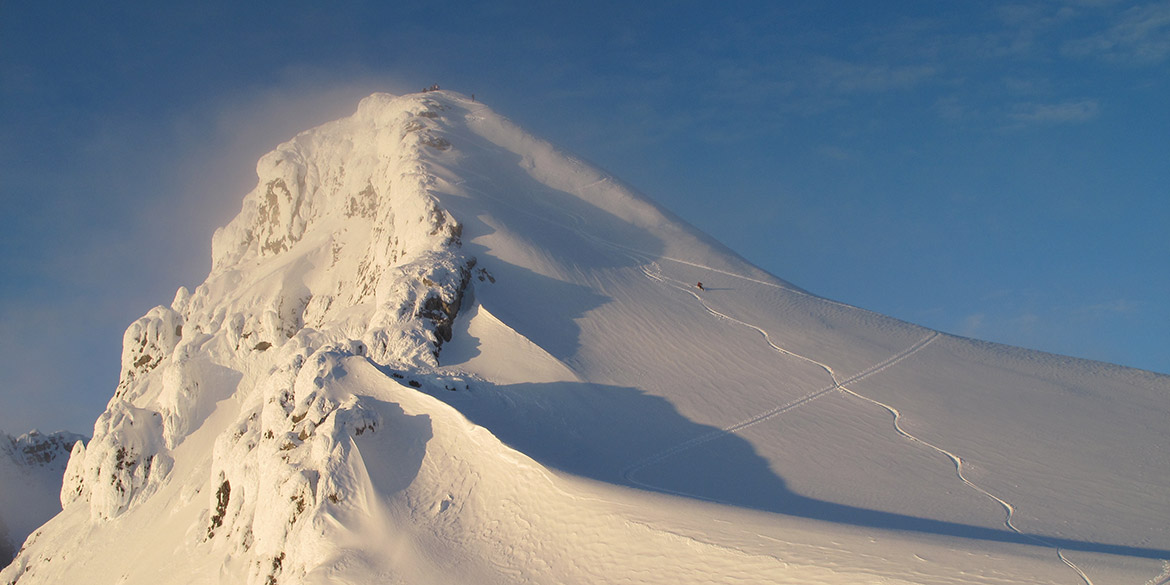 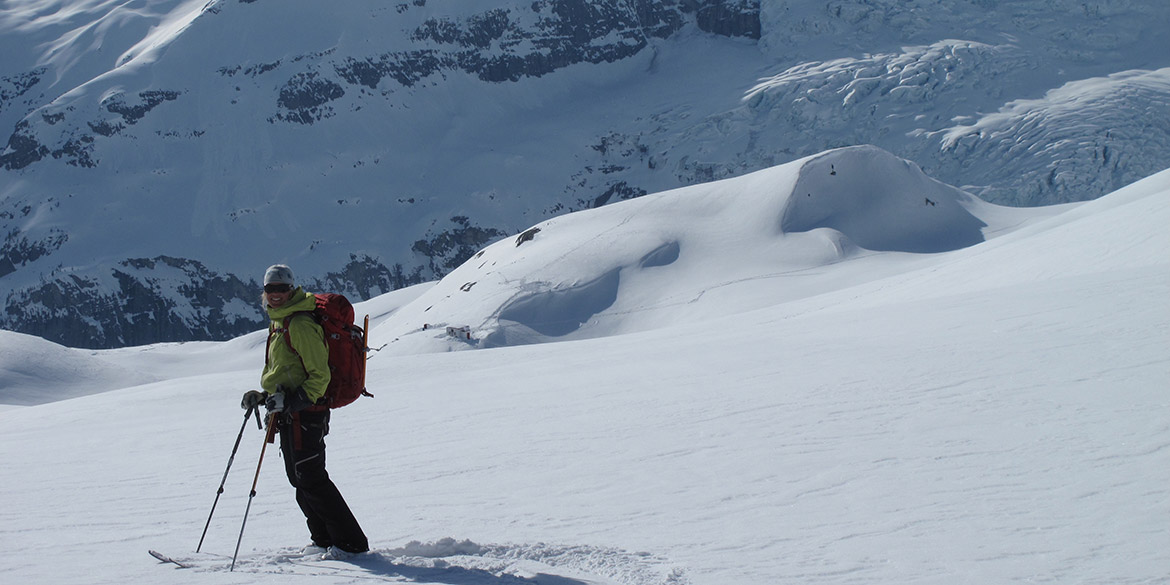 Already dreaming of spring in the alpine? Book your spot now!

Send us an email; we'd be happy to answer any questions you might have. If you would like to make a booking at one of our lodges, first check out our availability calendar, then head over to the booking page and fill out your trip request in the form there!

Availability
Thanks for reaching out. We'll get back to you shortly!
Oops! Something went wrong while submitting the form.

Find Us On Social Media